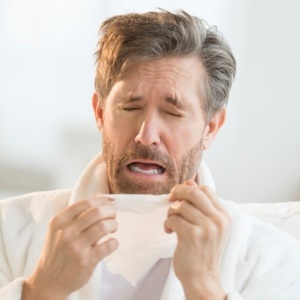 Is it bad to contain sneezing?

For education, when we are in public we tend to endure sneezing. We cover our nose and mouth to drown them. We sneeze in.

This practice is strongly discouraged and could have serious health consequences.

We tell you which ones.

What happens if you hold a sneeze

The increase in pressure caused by suppressing sneezing can cause some negative consequences for our health.

Especially never hold a sneeze by covering your nose and mouth because you could end up in the hospital emergency room with a hole in your throat.

This is what happened to a 34-year-old man in the United Kingdom.

After trying to contain a sneeze covering his nose and mouth he felt a painful and throbbing sensation in his throat. When he arrived at the hospital he had lost his voice and could barely swallow.

The tests showed that by suppressing the sneeze the pharynx had been perforated. Fortunately, the man recovered.

Another reason why you shouldn’t hold your sneeze

Sneezing is a reflex act that occurs in response to some trigger, whether physical, chemical, allergic or infectious. It is a defense mechanism of our body.

The air expelled with sneezing carries away the particles or germs that have produced it.

Containing the sneeze can cause the germs present to travel to more internal areas of the nostrils or ear, and cause infections.

These kinds of problems are rare, so you don’t have to become obsessed.

You know! The next time you have to sneeze, it is best to do it.