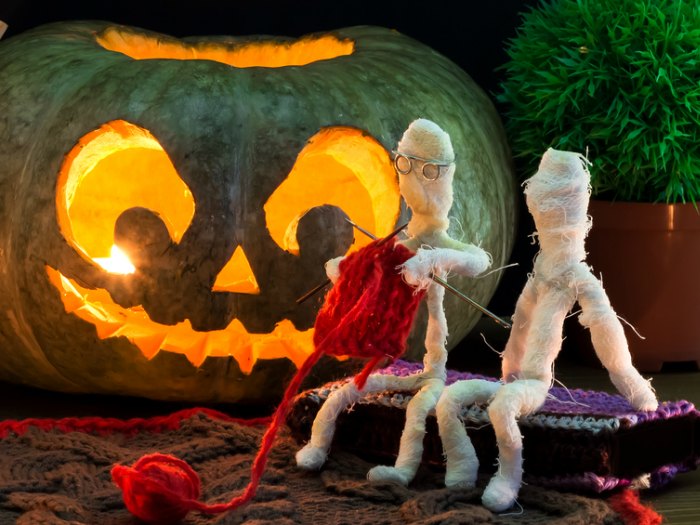 With a marker, draw a footprint on a large sponge. Trim the footprint. Pour washable paint into a pot.

Soak the sponge in the paint and sponge the footsteps from the sidewalk to the main door for visitors to follow.

Turn the sponge around to paint the footprints of the other foot.

A good idea is to sculpt green peppers like lanterns. We can make a line, and even try red and yellow peppers, and form an army of terrifying faces to receive the goblins at the door. They never recover from fright!

Wrinkle tissue paper until you make a ball and place it in the center of another piece of tissue paper. Lift the corners of the plain paper and curl around the ball. Tie a rolled strip or a piece of tape around the ghost’s neck and draw a face with a marker. They can be hung around the house. You can also glue and prepare a black hat and a layer of colored paper to make a witch.

Start with a piece of gauze 1.80m long and 90cm wide. Place a balloon filled with white helium in the middle of the fabric and gather the gauze around the balloon without squeezing. Draw a horrifying face on the gauze with a marker. We can put several ghosts in a box, so when someone opens it, the ghosts float in the air and scare everyone. We can also line them up in front of an open window or fan and see how they float and move smoothly in the air.

Cut some 1.30m long ribbons and glue them to the ceiling. We will need a very dimly lit room. Just before the victim arrives we can moisten the strips with water. When people arrive walking to the area of ​​wet and viscous strips, they rub against their foreheads and they will be frightened.

7. Parts of the human body

This is a good decoration for a room with dim light. We can have several cubes with pieces of members to frighten our friends. We can cut several sausages with the appropriate length so that they look like amputated fingers. Cook some noodles and spaghetti with blue and red coloring to look like veins. A group of chives swinging in a bowl will look like eyes. We can also fill a red balloon with hot water, spread strawberry jam and invite our friends to touch a brain.

8. Bones that creak under your feet

In 10 ideas for Halloween, spread pieces of dry bread and crackers under a rug. When the guests walk on the carpet it will sound like they are stomping eggs.

We can record several terrifying sounds and play them during the party. A large sheet of metal or cardboard can make thunder. By pouring raw rice on a baking sheet we can rain. Wrinkle a handful of cellophane to crack the fire. Add a few cries of homegrown. Cut carrots in half to get the sound of bones that break. Shake a plastic bag in front of the microphone to make the sound of the bats. Blow gently with a straw inside a bowl of liquid to achieve the sound of a bog. Search the entire house and garden for a hinge that squeaks and burn it before someone greases it.

10. Lighting at the Halloween party

When we have everything illuminated with such a dim light it is a good idea to put some reflective tape on the exits. Black light bulbs always give a good effect, especially if we disguise ourselves as a skeleton. This is one of the best 10 ideas for Halloween.